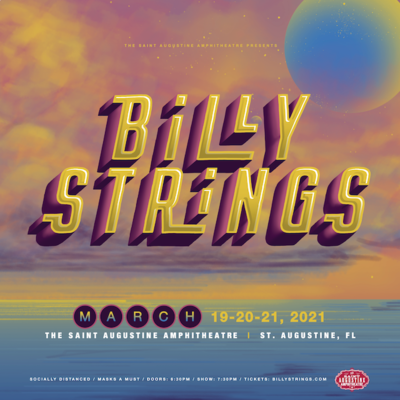 Description: <p>Grammy-nominated singer, songwriter and musician Billy Strings launches a special six-night event, &ldquo;The D&eacute;j&agrave; Vu Experiment,&rdquo; broadcasting live from Port Chester, NY&rsquo;s The Capitol Theatre. Broadcasting live each night, the first and last performances of the series will be available to view for free via The Relix Channel on Twitch, while tickets for the four additional shows can be purchased now at FANS. A portion of all proceeds will benefit two organizations: The Rex Foundation and Backline. It is no coincidence that these dates coincide with the 50th anniversary of the Grateful Dead&rsquo;s legendary six-night run at The Cap in 1971. As a nod to those historic shows, Strings plans &ldquo;The D&eacute;j&agrave; Vu Experiment,&rdquo; in which the band hopes to tap into the musicianship and fearlessness that the Grateful Dead did 50 years ago. The March 19-21 livestreams will take place from a socially-distanced concert series at the Saint Augustine Amphitheatre in Florida.</p>