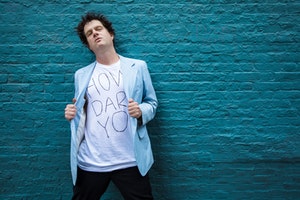 Description: <p>Rarely does a year go by without one or two releases from prolific Detroit hard rockers Electric Six, who arrived on the scene running in 2003 with comedic hit singles for &ldquo;Gay Bar&rdquo; (whose video was a softcore Abraham Lincoln fantasy) and &ldquo;Danger! High Voltage.&rdquo; The video for the latter includes singer Dick Valentine wearing electric underwear during a three-way sexual encounter with a stuffed moose&hellip;I did say comedic, right? If you take a lot of stock in who a band cites as influences, then be advised (or warned, as the case may be) that Valentine lists his favored forbearers as &ldquo;Rock Me Amadeus&rdquo; star Falco, Devo mastermind Mark Mothersbaugh, and occasional Frank Zappa co-conspirator Captain Beefheart.</p>