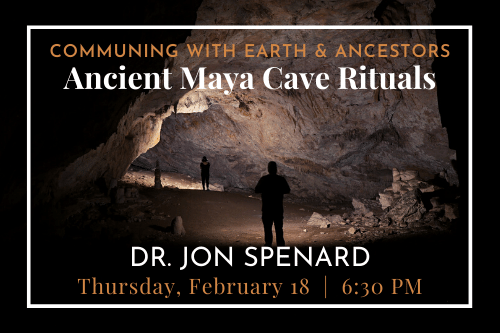 Description: <p><strong>San Diego Archaeological Center: </strong>The ancient Maya are perhaps best known for their jungle-covered cities with large plazas and grand temples standing taller than the forests encasing them. These built places are often depicted as the settings of elaborate state rituals where elites would perform their ceremonial duties in front of the masses. Yet important rituals were not performed only in cities. Archaeological research over the last few decades has come to reveal that caves and cave-like spaces were among the most potent and important places for ritual performances by the ancient Maya. They were the places where the ancestors originally emerged from and where they returned to after their passing. They were also portals to where powerful Earth forces, particularly the rain deity, could be ritually accessed and negotiated with. In this talk, Dr. Jon Spenard will discuss his ongoing cave ritual research in Belize with a particular focus on understanding the relationship between cave rituals and the ancient Maya collapse. This event will be held on Zoom and is limited to 100 attendees. Pay what you wish</p>