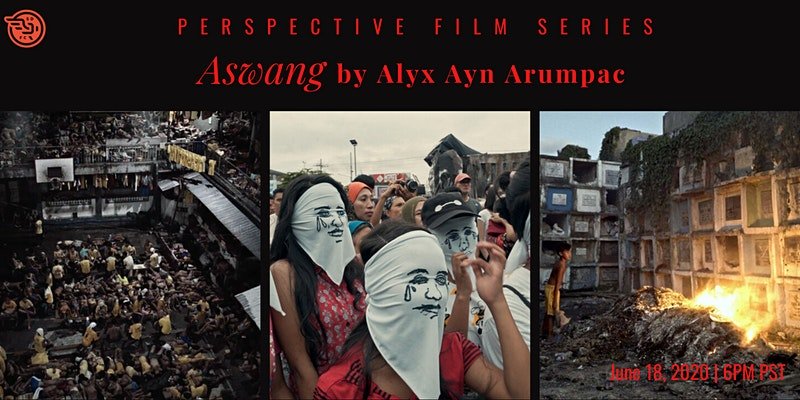 Description: <p>About this Event TFC at the Movies presents, in commemoration of the Philippine Independence Month, San Diego Filipino Cinema’s Perspective Film Series: Aswang June 18, 2020 Schedule: 6PM-7:30PM PST – Online film screening 7:30-8:30PM PST – Q&amp;A with filmmaker Alyx Ayn Arumpac Moderated by SDFC Executive Director and filmmaker Benito Bautista and Kalayaan SF Chairman, SDFC Board Member, and film producer Radi Calalang Community Partners: Malaya Movement and Heritage Investments Synopsis: Jomari, 6, fends for himself as he waits for his mother who is imprisoned on drug charges. The streets are a big game of survival for him, where fantasy and reality mix easily. He tells the filmmaker that the police sometimes ask him for information on drug users in his neighborhood. One day, he disappears. In two years, over 20,000 men, women and children are killed in Duterte&rsquo;s war against drugs in the Philippines. Documenting the growing violence and traversing through Manila&rsquo;s underbelly into the homes of victims, Aswang follows a little boy born into this cruel system and a man who tries to fight it. Brother Jun, a religious brother and a photojournalist, spends his evenings going after crime scenes and funerals to document the cases and help the people bury the dead. Being a member of the clergy in a deeply religious society, they openly pour out their stories and sorrows to him. Victims also tell him of abuses by drug enforcement police, including a secret jail where they detain and torture people to extort money. Brother Jun and his colleagues expose the secret jail, but with a disastrous aftermath. Online Screening and Q&amp;A Instructions: &bull; The Vimeo link to watch the film and the Q&amp;A Zoom link will be emailed to ticket holders on the day of event. &bull; Screening portion of the event starts at 6PM, PST. Q&amp;A portion of the event starts at 7:30PM PST and ends at 8:30PM. &bull; For questions, please email info@sdfilipinocinema.org Help San Diego Filipino Cinema thrive! Your support will help us continue to bring our community important events like this and film educational programs such as film workshops, filmmaker mentorship, film talks, and more. You may send your donation to our secure PayPal gateway at http://sdfilipinocinema.org/donate/ Thank you!</p>